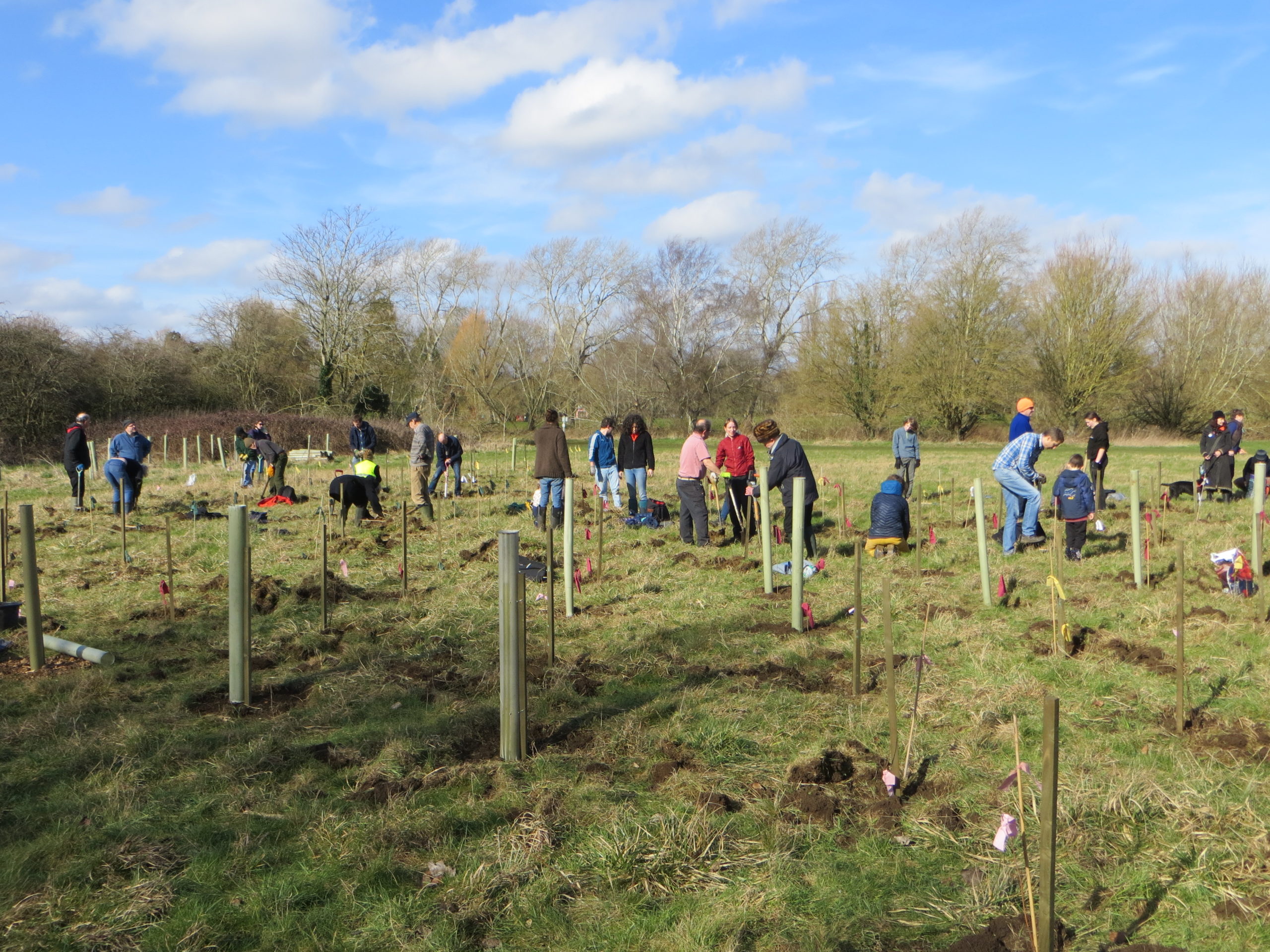 Members of local community group Abingdon Carbon Cutters and other volunteers from across the area planted 420 trees at Rye Farm Meadow.  The work was the first stage of a project that will eventually result in 1,500 trees planted by the River Thames over the next three planting seasons.

The tree planting in Abingdon was the first such event licensed by Vale of White Horse District Council since the launch of its new tree planting policy.  The policy outlines how the Vale will support local tree planting initiatives, as well as how it will protect, plant and manage trees on council land.

Vale of White Horse District Council is now encouraging more communities to apply to plant trees on council owned land.  If you have an idea for a tree planting project, please talk to your local parish council or community group and encourage them to apply.  For more information visit whitehorsedc.gov.uk/trees.

Cllr Catherine Webber, Cabinet Member for Climate Emergency and Environment, and Cllr David Grant, Chair of the council’s Climate Emergency Advisory Committee, were among a number of Vale councillors who took part in the event.

Cllr Webber said: “It was great to see so many people from across the local community join the tree planting efforts.  Thank you and well done to Abingdon Carbon Cutters and to all the families who contributed to this wonderful occasion, including the young children who helped by piling up the clods of grass and counting worms!  We’d now love to see lots more tree planting initiatives across the district, and I hope that this first event really inspires others to get involved and potentially submit an application.”

Cllr Grant said: “Trees absorb carbon dioxide from the atmosphere and so play a vital role in helping us to reduce local carbon emissions.  I really encourage people across the Vale to get involved in tree planting and other events that help to tackle climate change in their community.”

Sally Reynolds from Abingdon Carbon Cutters, said “The trees will form part of the Queen’s Green Canopy to celebrate her Platinum Jubilee, which is lovely. But planting trees will not on its own be enough to prevent climate chaos. We need to drive less, consume less “stuff”, eat less imported and processed food, and insulate our houses to conserve energy. All these will make us healthier, happier and warmer, so it is a win-win prescription!”

Tackling the climate emergency is a major priority for the Vale which is aiming to become carbon neutral within its own operations by 2030.

The Vale’s new Climate Action Plan outlines the steps the council will take to achieve this aim, as well as how it will support local efforts to tackle the climate emergency.  This includes identifying sites for new tree planting and wilding opportunities on council land or through partnership opportunities on privately owned land to support natural carbon capture.

Abingdon Carbon Cutters is a Community Action Group working in Abingdon and surrounding villages to help reduce our carbon footprint in response to climate change, and promote sustainable and resilient lifestyles. It is part of the newly formed OnePlanetAbingdon consortium which runs the Climate Emergency Centre supported by Abingdon Town Council.  For more information, please visit abingdoncarboncutters.org.uk

To support the project in Abingdon, The Woodland Trust donated all the trees, the tree guards were repurposed from nearby Besselsleigh Woods, and Oxford Wood Recycling and CAG Oxfordshire funded tree stakes.