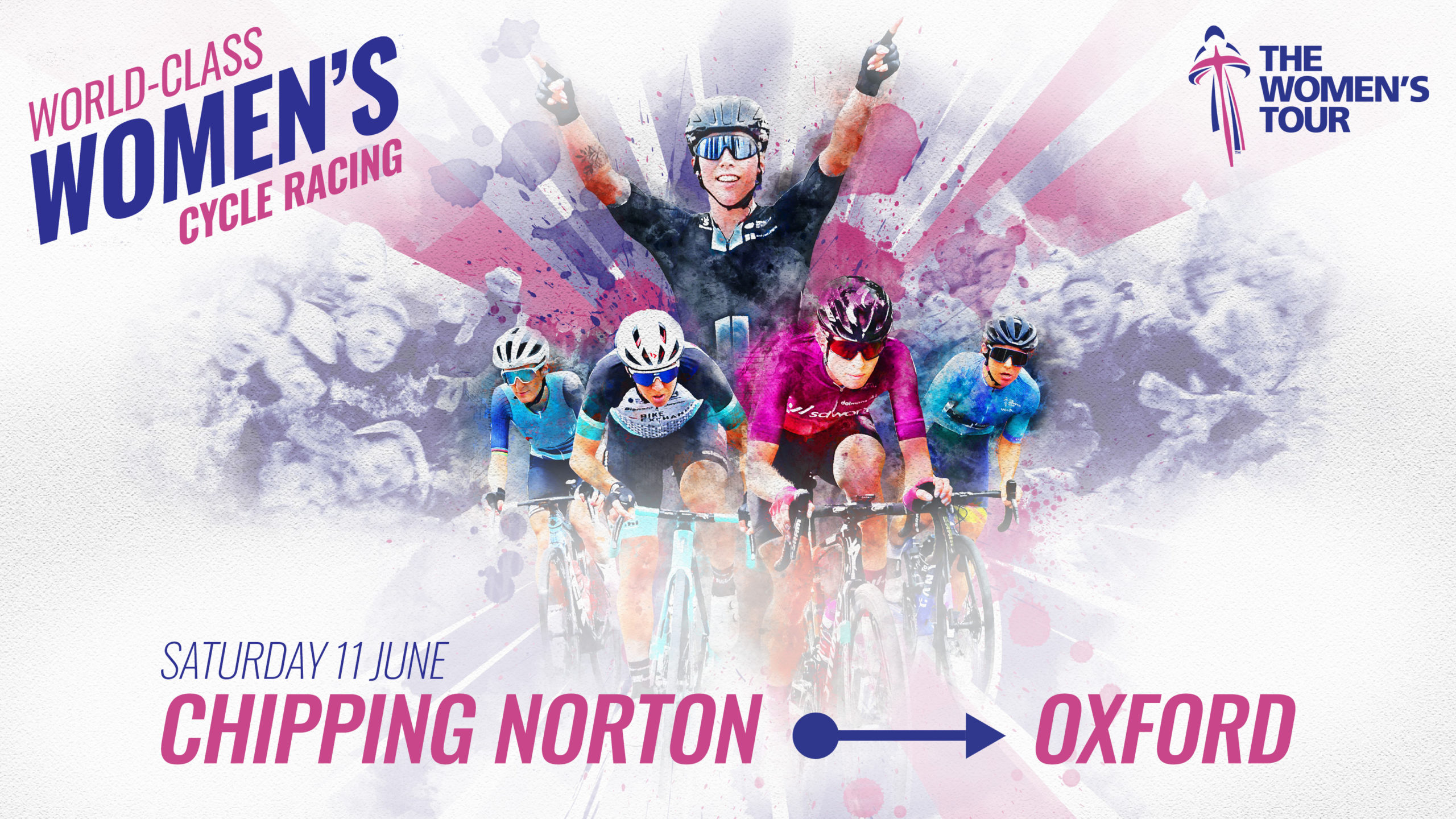 As part of race organiser SweetSpot’s three-year partnership with Oxfordshire County Council, and the county’s city and district councils, this stage will visit parts of the county that did not feature in previous stages.

Neither Chipping Norton, the county’s highest town, or Oxford have hosted a stage start or finish of the race to date, although the world’s best riders did pass through the historic city’s eastern side during last year’s stage from Bicester to Banbury.

Councillor Liz Leffman, Leader of Oxfordshire County Council, said: “What a fantastic way to showcase our wonderful county to the world. I’m confident this event will support and raise awareness of cycling and its benefits, as well as bring an economic boost to our communities – so important as businesses recover from the pandemic. Hosting this prestigious race for a third time is a great collaborative effort between the county council and our local authority colleagues.”

Michele Mead, Leader of West Oxfordshire District Council, said: “I am really pleased that Chipping Norton has been chosen as the location to start stage six. It’s a great honour for West Oxfordshire to be hosting the start of the race, and creates an opportunity for communities to come together to watch this prestigious event right on their doorstep. Chipping Norton is already a popular destination for visitors; this event will give a great boost to local businesses and traders as well as showcasing the beauty of our District.”

Councillor Jemima Hunt, Oxford City Council’s Active Travel and Cycling Champion, said: “We’re excited to be hosting the finish of the UK Women’s Tour in Oxford this year. Over the last two years the race has showcased our beautiful county, and we’re proud to welcome them to our historic city. I hope we’ll see more people inspired to get on their bikes to travel round the city and out across the county. As Chris Boardman at Active Travel England announced last week, the ambition is for 50 per cent of journeys to be made by bike, or on foot, by 2030.”

This year’s stage winner will add their name to an already prestigious Oxfordshire roll of honour: former world and European champions Jolien D’hoore and Marta Bastianelli triumphed in the race’s previous visits to the county. D’hoore took victory at the world-famous Blenheim Palace in 2019, while Bastianelli won in Banbury on the opening day of last year’s race, which took place in October as a result of the pandemic.

Further details of the Oxfordshire stage, including the full route, locations, and timetables, will follow in due course.

Councillor Andrew McHugh, Cherwell District Council’s Lead Member for Health and Wellbeing, said:“Last year’s Oxfordshire stage of the Women’s Tour was a truly remarkable day, drawing big crowds to Banbury and Bicester as local people and cycling fans gathered to support some of the world’s best athletes. We are big backers of the event as it returns to our county to entertain and inspire.”

Councillor Emily Smith, Leader of Vale of White Horse District Council, said: “I’m really looking forward to seeing the Women’s Tour return to the Vale of White Horse and excitement building in the coming weeks once the full route is announced. The tour is a great way of promoting cycling to people across the district, particularly for young women. Thousands of residents and visitors lined the streets to cheer the riders on in 2019 and 2021 and I’m sure we will see even more people this year with the event taking place on a Saturday.”

Councillor Sam Casey-Rerhaye, Cycling Champion at South Oxfordshire District Council, said: “It’s more important than ever to encourage people to take up more sustainable ways of getting around. The Women’s Tour has a really important role to play in helping to inspire people to take up cycling, which can lead to real health benefits across the community. I absolutely support the ambition to create more cycling infrastructure that is better and safer, which will encourage people to take it up, both as a mode of transport and as a sport.”

Mick Bennett, Women’s Tour Race Director, said:“Oxfordshire has welcomed the Women’s Tour so enthusiastically during our previous two editions. We’re particularly looking forward to taking the race to those parts of the county that we’ve not passed through in 2019 and 2021, particularly the beautiful market town of Chipping Norton, which will put on a show by hosting the stage start. The world-class field of riders we attract will compete around the world throughout the 2022 season, but I have little doubt that the finish in Oxford will be among the most spectacular backdrops they’re greeted with this year.”

With cycling enjoying a boom in the UK, and hundreds of thousands of new and returning cyclists taking to two wheels, there are a range of sponsorship opportunities available with the Women’s Tour in 2022. Packages range from title partnerships of the event and sponsorship of the prestigious points and sprints jerseys, to being the brand forever known for funding the race’s first-ever live TV broadcast. Visit sweetspotgroup.co.uk/partnerships for more.

For more information about this press release contact the Oxfordshire County Council and Cherwell District Council communications team on 01865 323870 or email press.office@oxfordshire.gov.uk