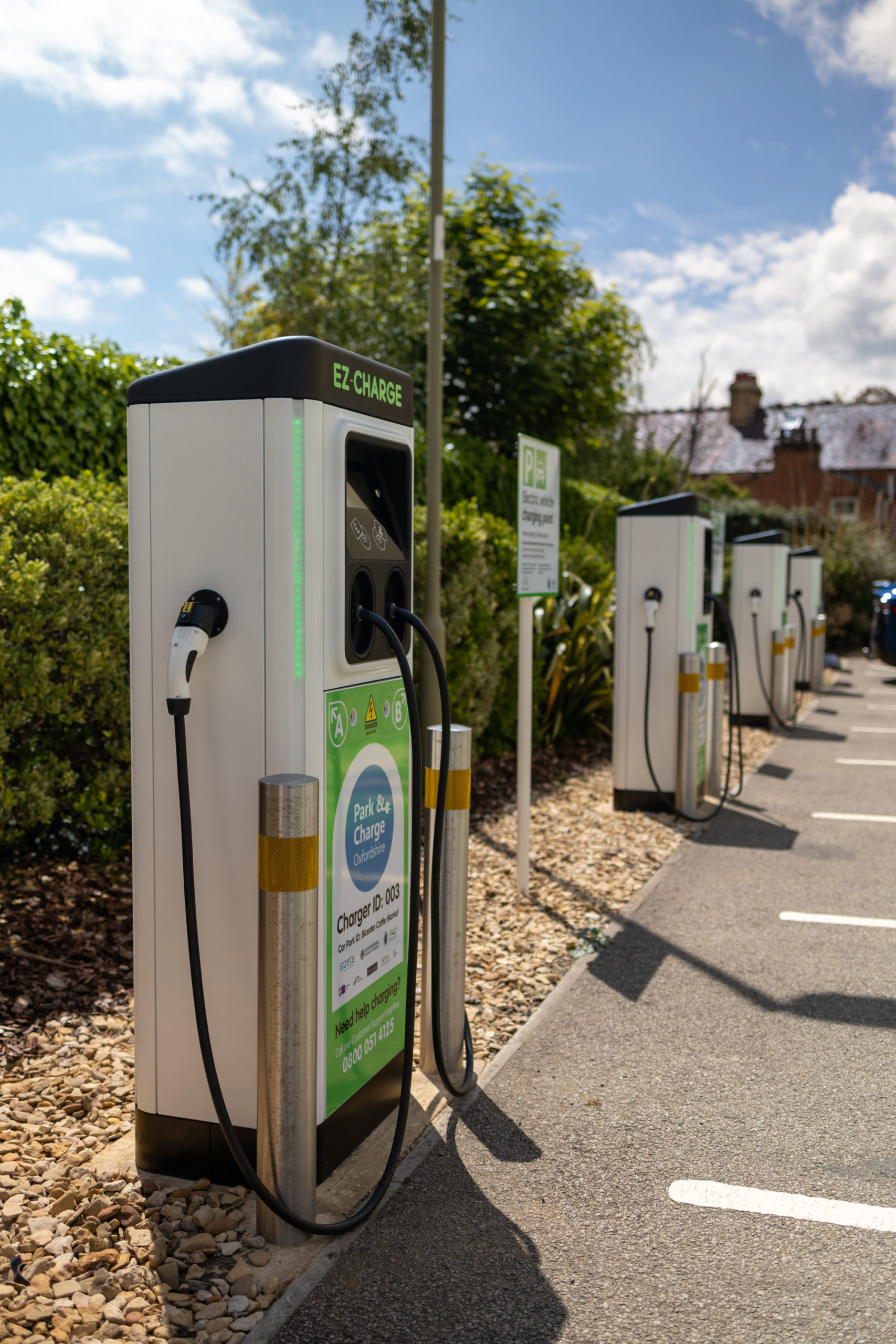 The roll-out of hundreds of electric vehicle (EV) charging points in council-owned car parks in Oxfordshire has begun.

Following the installation of the first park and charge EV hub at Bicester’s Cattle Market car park in May, the locations of the remaining 19 sites have been announced. Work started earlier this month and is due to be completed by March 2022.

The park and charge scheme allows residents without off-street parking to park for free overnight and charge up using a ‘fast’ 7 – 22kw EV charging point. The chargers will also provide much needed battery top-ups to commuters and visitors during the daytime.

The project is being delivered by a consortium of partners including Oxfordshire County Council, University of Oxford, Urban Integrated UK, and Bicester firm Zeta Lighting which is running the EV charging service under the trading name EZ-Charge. Cherwell, West Oxfordshire, South Oxfordshire and the Vale of White Horse District Councils are also supporting the scheme and hosting the EV charging hubs.

Councillor Pete Sudbury, Oxfordshire County Council’s Cabinet Member for Climate Change Delivery and Environment, said: “Many councillors have already had residents who don’t have off-street parking asking about charging EVs, and we at the county council know we need to accelerate different solutions to that problem. Park and charge is a key part of the Oxfordshire EV strategy, helping people to move away from using diesel and petrol vehicles.”

The locations set to benefit from park and charge hubs, each containing between 10 and 16 EV charging points, are:

Councillor Sue Cooper, South Oxfordshire District Council’s Cabinet Member for Environment, Climate Change and Nature Recovery, said: “This is great news for residents as they will have access to 62 new chargers across the district. This could be the difference to those living in Thame, Wallingford and Henley, to make the switch to EV ownership knowing they have easy access to charging points. Being part of this project also shows the council’s determination to take action to tackle the climate emergency, which we are prioritising as part of our corporate plan.”

Councillor Catherine Webber, Vale of White Horse District Council Cabinet member for the Environment and Climate Emergency, said: “We are delighted that we can accommodate so many EV charging points across the Vale in our car parks. It should really help those wishing to switch to EVs but who live in town centres such as Abingdon, Faringdon and Wantage and have on-street parking which can make it difficult to access charging. More chargers should mean more people can make the switch to cleaner travel.”

Councillor Dan Sames, Cherwell District Council’s Lead Member for Clean and Green, said: “The pioneering electric vehicle charging project has exceeded expectations and usage continues to grow. We are delighted to be able to expand the project and create more charging hubs within Cherwell. The added bonus is that we are using home grown technology developed by a Bicester-based company.”

Councillor David Harvey, Cabinet Member for Climate Change at West Oxfordshire District Council, said: “With transport emissions being the largest contributor to greenhouse gases and air pollution in the district, moving to electric vehicles is a hugely important step in reaching our local and national net zero targets. The positive news is that recent statistics suggest that one in six cars now sold have a plug. We are delighted to be a partner in the park and charge Oxfordshire project, which will see more EV charging points installed across the county and here in West Oxfordshire, making it even easier for residents and business to make the switch to ultra-low emission vehicles.”

It is predicted that by 2030, one in five cars on Oxfordshire’s roads will be an EV, according to data modelling by the University of Oxford.

The £5.4 million programme is among the first of its kind in the UK and is being funded by the Office for Zero Emissions Vehicles through Innovate UK and the government’s On-Street Residential Charging Scheme.

Transport Minister Trudy Harrison said: “Providing accessible and reliable charging infrastructure is fundamental in our mission to achieve net-zero. I am delighted Oxfordshire County Council has received funding through our £20m On-Street Residential Chargepoint scheme and I hope it gives the area a boost to go green and to make it easier for drivers to make the important switch to electric.”

More details about the scheme are available on the Park and Charge website.